After 26 months of online polling and promotion, the final batch of Exit Survey published reports has been released on scribd for this project that includes data as of January 31, 2011.

The following results are based on 451 total respondents, with a +/- 9 margin of error. For more information on the available documentation that was compiled in this informal study, curious onlookers can reference the Church of Scientology Exit Survey Reporting Index or visit the related dox collection on scribd.


The 27 new responses we got in the last 4 months stacked up mostly in the time-served demographic categories for 10+ years in the official Church of Scientology. We were also fortunate to get a significant number of OT level folks participating in the final months, along with a handful of Independent Scientologists that helped to expand the range of experiences to some extent. A sample of some of the more interesting highlights from the published reports is featured below.


Click on the thumbnail images
to view full-size charts 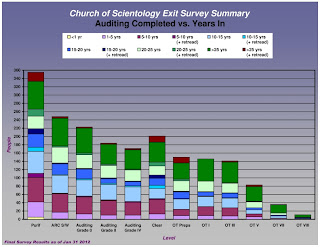 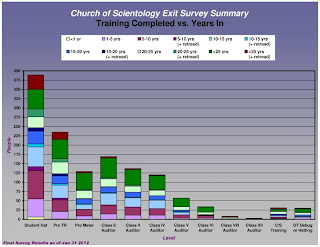 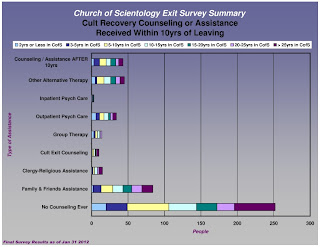 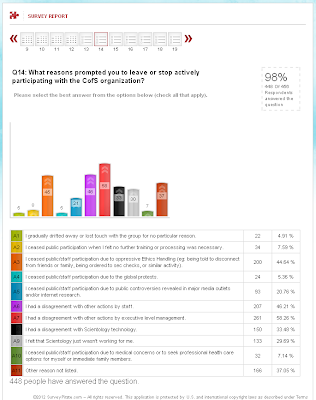 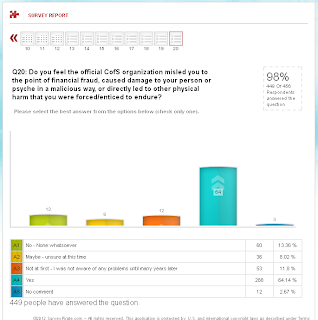 This online exit survey was one of several data collection projects being featured and promoted to new audiences here on the Exit Zone blog. Although this effort has ended due to the SurveyPirate service being decommissioned, all of our other projects are still ongoing.

Special thanks to all the former members of the official Church of Scientology that participated, the feedback received from current members pondering their involvement with the organization who found the published reports useful has been inspirational.

There has also been a request from the ESMB camp to do another survey project with a different goal in the future. We hope to showcase this future survey project on this blog later this year, to continue our dedication to broadening public awareness and documenting the truth regarding the bizarre world of scientology being a dangerous cult.

Click the title of this post or on any other entries on this micro blog to visit the related link for a given announcement.