Margaret Singer: Cults in Our Midst 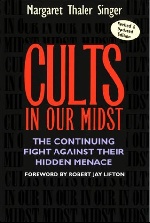 Cults in Our Midst: The Continuing Fight Against Their Hidden Menace is the second edition of a nonfiction psychology book on cults, by Margaret Singer with a foreword by Robert Jay Lifton. This text was first published in hardcover format during 1996, with a slightly different subtitle with coauthor Janja Lalich, Ph.D.

The second edition of this book, without Lalich as co-author, was published in paperback form in 2003 shortly before Dr. Singer's death. This revised version of the text was used as the primary source for this review, and includes a new introduction and postscript section that brings the book up to date. A lively yet comprehensive oral review of the first edition was also done in September 2008 by Mr.Fyde's channel on YouTube, and is featured in playlist format at the bottom of this post.

Dr. Margaret Thaler Singer has been called "the preeminent cult expert of the 20th century" by those who follow in her footsteps. She was a clinical psychologist and Professor Emeritus of the Department of Psychology at the University of California, Berkeley. A leading expert on thought reform and cult techniques of persuasion, she forged a path where few had gone in her time.

According to her ICSA author profile, she was known as a soft-spoken but hard-edged Berkeley psychologist and expert on brainwashing who studied and helped authorities and victims to better understand the destructive nature of many dangerous cults. [San Francisco Chronicle]

Well-versed with the likes of Peoples Temple, Branch Davidian, Symbionese Liberation Army, Unification Church and Psychotherapy Cults, Mrs. Singer testified in hundreds of cases in court -- but she also assisted anyone who called her listed home phone number asking for help. [Oakland Tribune]

Cults in Our Midst is considered one of Dr Singer's seminal works. For those who are new to the subject of cultic studies, this book and Lifton's Thought Reform and the Psychology of Totalism should be consider the classic starting points for further study in regards to academic due diligence for self-healing or self-education purposes.

A formal review of the first edition by Rev. Walter Debold was published in a 1995 volume of Cultic Studies Journal astutely described the book as follows.

Cults in Our Midst is not a book about weird people who join crazy groups. It’s about how all of us, at various times, can fall into vulnerable states during which another person can wield more influence over us. Alluding to Big Brother of Orwell’s 1984, Singer says: "Instead of one Big Brother, we see herds of Big Brothers in the world today." And she notes that they promise intellectual, spiritual, political, and self-actualizing utopias. "Eventually these groups subject their followers to mind-numbing treatments that block critical and evaluative thinking and subjugate independent choice in a context of a strictly enforced hierarchy."  [ICSA Archive]


Roadmap of the Fundamental Principles of Thought Reform

In Chapter 3, Dr. Singer provides a comprehensive yet down-to-earth explanation of the history and mechanics behind the process of Brainwashing, Psychological Coercion, and Thought Reform.

The book explains that at the time of initial publication of this book (1996) there were many previously used buzzwords by various experts to describe the process of psychological coercion that include: thought struggle, brainwashing, thought reform, coercive persuasion, mind control, coordinated programs of coercive influence and behavior control, and exploitative persuasion. [pg53 in the 2003 edition]

The author also states that this gem of a chapter fits into the bigger field of cultic studies of the time by focusing on those aspects that are best conveyed by the first and last terms in the list – thought struggle (Mao Tse-tung 1929) and exploitive persuasion (Singer and Addis 1992). Furthermore, the approach she takes in undressing this somewhat unsavory subject from these particular aspects, provides possibly the best basic introduction printed to date on how a member of a cult can be unduly and unknowingly influenced.

Many former members of various groups have praised this book for being an all-inclusive wake-up call they desperately needed to “snap out of it.” In this blogger’s humble opinion, the magic mojo of Singer’s pen is fully unleashed in Chapter 3 because of the excellent way she covers the essential need-to-know aspects of thought reform and cultic coercion.

After covering the basic background and history of persuasion and control techniques, Chapter 3 goes on to explain that the tactics of a thought-reform program are organized to serve these specific functions: [pg 62 in the 2003 edition]


Dr. Singer continues on to explain the evolutionary product of her decades of field studies research: Singer’s 6 Conditions of Thought Reform. Additionally, she provides an insightful comparison of the other two basic schools of thought on the subject that were contemporary works during her practice in the field of cult recovery: Lifton’s 8 Criteria of Thought Reform and Schein’s 3 Stages of Conversion.

A summary of these methodologies for identifying coercive tactics used by cults, and how the steps in each models correlate to each other, is also provided in the following table. [pg62-4 in the 2003 edition]

Excerpt from Cults in Our Midst 2003 edition, pg63


At the time of initial publication, these 3 schools of thought on recognizing the classic signs of cultic mind control were the widely accepted standard amongst scholars, and they still are today. However, there has also been a new school of thought on the matter of conversion through thought reform by Steve Hassan, known as the B.I.T.E Model of Mind Control, which is seemingly growing in popularity amongst his peers.

In the months ahead, we plan to explore all four (Singer, Lifton, Schein and Hassan) of these methodologies for identifying commonly used thought reform tactics used by cults. Thus the recent series of posts on this matter, including this book review, are an attempt to lay the basic groundwork for future reference. (See also Confronting Thought Reform & Coercive Persuasion and Glossary of Wog Words #2)

Definitive Work on the Various Types of Coercive Persuasion

In Chapters 6 and 7, Dr. Singer provides an informative description of exploitative persuasion tactics that cults like the Church of Scientology employ, and the effect each has on unsuspecting parishioners.

She takes a very common sense approach in addressing this material in laymen terms, and categorizes these tactics as physiological vs. psychological persuasion techniques. An outline of the general topics covered is summarized in the following table.

There is so much valuable material in Singer's Cults In Our Midst, this quick synopsis of the major highlights barely does it justice. Suffice it to say, if former cult members or their loved ones only read one book on the subject of subversive influences a destructive group asserts over its followers, this book is definitely the one you need to get.

Don't have time to read it? Well then, check out the following series of videos that take the time to provide a more comprehensive review of the first edition of the text.


MrFyde on Cults in Our Midst

Click the title of this post or ob any other entries on this micro blog to visit the related link for a given announcement.