Lawrence Wright's penultimate essay on Paul Haggis in The New Yorker magazine entitled THE APOSTATE has unleashed yet another media feeding frenzy regarding the alleged human rights abuses the Church of Scientology inflicts upon it's Sea Org members.

However this time the media wave comes with with with and additional one-two punch that was long overdue: A celebrity bares his soul about what he experienced and the FBI have been investigating the claims of abuse.

Amongst the ensuing fallout a virtual tsunami of media articles and related coverage is currently flooding the internet, one of the best sidebar tidbits this blogger came across was the article featured on the backlink of this post from the Manage Your Life blog on Yahoo!Shine.

This gem struck me as not only well worth re-posting on this micro-blog for educational purposes, but also worthy of expanding each item listed with additional source materials that support the information highlighted The New Yorker expose.


Originally by Piper Weiss, Yahoo!Shine Staff with additional hyperlinks, images and dox inserted after each item, and supplemental commentary by this blogger noted in accented text. Click on thumbnail images for additional reference on any of the visual annotations.

"Journalist Lawrence Wright interviews current and former members of faith, including Academy Award winning writer Paul Haggis, who denounced his three-decade affiliation with Scientology publicly. The 28-page investigation into the history and horror stories of Scientology is chock full of weird. Here are the highlights:"

1.   The FBI probe: The article reveals that the church is under investigation from the FBI for human trafficking. Former members have made claims of unpaid, forced labor and physical abuse from current head of the organization, David Miscavige. 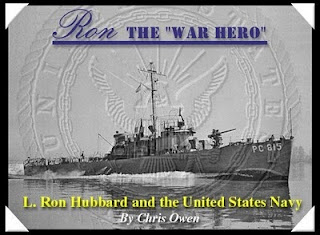 3.   The celebrities: A lot of them were siphoned by a Scientologist acting teacher at The Beverly Hills Playhouse. That's how Anne Archer joined the fold. Now her son, Tommy Davis, heads up the church's Celebrity Centre. In other news, bossman Miscavige was Tom Cruise's best man when he wed Katie Holmes.

Note the Tom & Katie photo from the original article below, and cross reference this bike to the motorcycle shown on the left in the photo added for clarifying item #12. 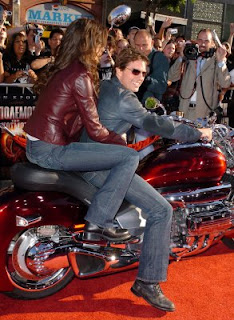 4.   The six-figure membership: Members can spend upwards of $100,000 on courses and training in the church.


The vast number of levels on the Scientology Grade Chart is seemingly endless, and the farther up you the more outrageous the costs become. The fee schedules in the following collection of dox illustrates how easy it is for membership in this cult to lead to financial ruin.


5.   The fenced-off boot-camp: If you don't have that money you can work for your faith as a Sea Org member at Gold Base, a compound in central California. Miscavige spends a lot of his time there and most high-level members make there way to the base at some point for brief, intensive stays.

The razor fence surrounding the cult compound from: Scientology Headquarters (Gold Base/Int Base). 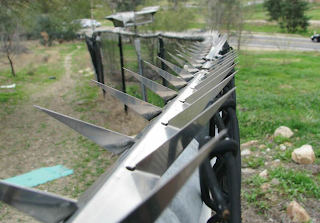 6.   The fenced-off prison: There's also a re-education camp near Gold Base. Here's the description: "Sea Org members who have 'failed to fulfill their ecclesiastical responsibilities' may be sent to one of the church’s several Rehabilitation Project Force locations. Defectors describe them as punitive re-education camps. In California, there is one in Los Angeles; until 2005, there was one near the Gold Base, at a place called Happy Valley. Bruce Hines, the defector turned research physicist, says that he was confined to R.P.F. for six years, first in L.A., then in Happy Valley. He recalls that the properties were heavily guarded and that anyone who tried to flee would be tracked down and subjected to further punishment."

The following 1999 German documentary about Scientology's Rehabilitation Project Force ( RPF) was the first to expose the world at large to the cult's POW style abuses.

7.   The escape: Two former members claim to have escaped in the middle of the night. One drove a car through a fence.


Mark Headley's great escape was even more hair raising, check out his book Blown For Good for an unforgettable tale on escaping Gold Base. 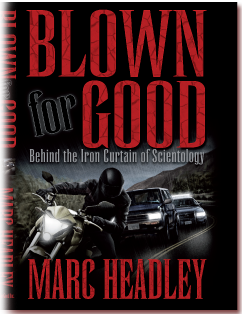 8.   The punishment: According to a former Gold Base security chief, the church is not averse to using mental and physical tactics to bring escaped members back in the fold.

Amy Scobee's horror stories in her book Scientology Abuse At The Top goes into even more detail on the violence surround the cult's nefarious leader David Miscavige. 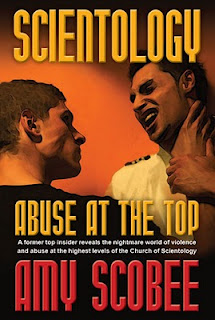 9.   The most bizarre game of musical chairs ever: A violent version of the kid's game set to Bohemian Rhapsody, mandated by Miscavaige, took place one night at Gold Base. It lasted all night, and by the ned people were punching each other. As full-time residents and workers at the Base, they were playing for their livelihood. Everyone who lost would be shipped off the Base immediately, deprived of their shelter and $50 a week income.

Marc Headley was the first to disclose the infamous Musical Chairs Incident, and his book listed above goes into further details. Since we already featured that reference, it seems apropos to note the gut wrenching story of torture, abuse and humiliation endure by Jeff Hawkins during his days at Gold Base as featured in the Counterfeit Dreams book. 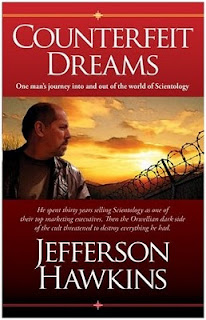 10.   The most bizarre celebrity anecdote ever: Actor Josh Brolin claims to have witnessed John Travolta using his Scientology practice to heal the wounded leg of Marlon Brando at a Hollywood party. “I watched this process going on—it was very physical,” Brolin recalls. “I was thinking, This is really f------- bizarre! Then, after ten minutes, Brando opens his eyes and says, ‘That really helped. I actually feel different!’ ” (Travolta, through a lawyer, called this account “pure fabrication.”) 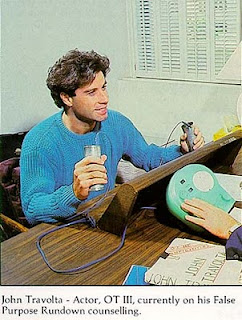 11.   The horror stories of Scientology kids: For kids who grow up in the church, there’s a thing called a ‘freeloader’ tab. If you want to leave the church’s fold, you’re charged with a six figure debt for unpaid coursework, according to ecclesiastical policy. Former underage members, including the niece of Miscavige who joined at 12, have formed an online support group called exscientologykids.com. They talk about how hard it is to leave the fold because they never received a formal education, and instead were put to work as manual laborers.

The article states: "In 2009, two former Sea Org members, Claire and Marc Headley, filed lawsuits against the church. They had both joined as children. Claire became a member of the Sea Org at the age of sixteen, and was assigned to the Gold Base. She says she wasn’t allowed to tell anyone where she was going, not even her mother, who was made to sign over guardianship."


The appalling treatment that Children in the Sea Org receive is unconscionable. The only words that can do this subject the justice it deserves, is the voices raised in unison from the kids who lived it.


12.   The horror stories of dealing with Tom Cruise: A former member claims he was ordered to pimp Tom Cruise's motorcycles, pro-bono, of course. Haggis claims Cruise reported him to the church when he joked about Scientology to Stephen Spielberg on the set of War of the Worlds. Another former member claims a botched project for Cruise resulted in a member being sent to the work camp for a stint.


From John Brousseau settles it, the personal account of the former Sea Org member who did the customization work to trick out Tom Cruise's favorite toys for $50 a week. Click the thumbnail to view the full-size image and notice the same motorcycle shown above with Tom & Katie is on the left: 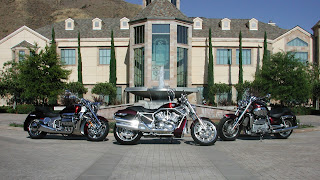 Tom Cruise’s motorcycles flanking Miscavige’s Harley at his $70 million palace. [Source] This is Building 50 built for RTC and David Miscavige in Hemet, California
at Gold Base. [Source]

13.   The horror story of Scientology chief's wife: David Miscavage’s wife, Shelly, hired several people for jobs at Gold Base, without her husband's permission. Shortly thereafter she disappeared. When the New Yorker asked Scientology spokesperson Tommy Davis of her whereabouts he said, “I definitely know where she is.” He didn't elaborate.

Nobody knows where Shelly is, but iy is widely hell DM is inseparable from his communicator Laurisse (Lou) Stuckenbrock as shown in the 2nd photo below from July 2008 when DM & Lou were seemingly on a double date with Tom & Katie at the Laguna Seca Moto GP in Monterey, California. The original photos by celebuzz.com recently disappeared but highlights captured here for posterity. 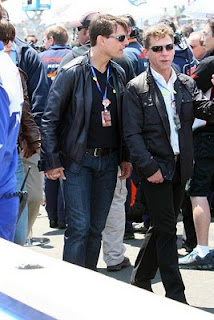 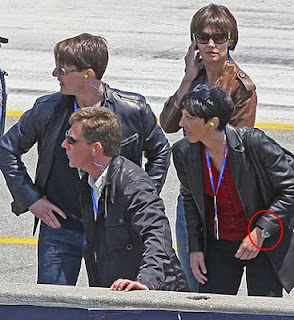 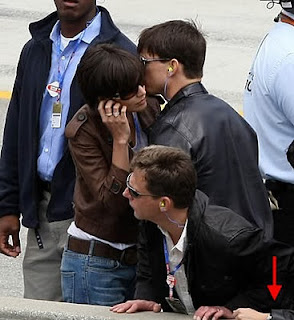 YES- Long post is long, but it needed to be said because the rabbit hole runs deep in Scientology. And considering the long history of insanity surrounding the Sea Org's Billion Year Contract, it needs to be said again and again. Until it stops.

Click the title of this post or ob any other entries on this micro blog to visit the related link for a given announcement.
Posted by AnonLover at 2/09/2011 03:52:00 AM
Email ThisBlogThis!Share to TwitterShare to FacebookShare to Pinterest
Labels: Becoming Informed, Good Reads, Outreach Messages, Videos