Warning Signs of a Dangerous Cult 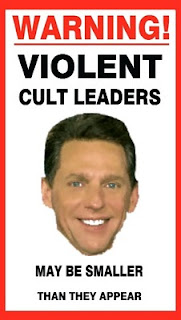 For current members who may be wondering if they have truly gotten involved in a destructive cult the internet holds a wide variety of lists of warning signs, checklists of dangerous factors, and classification charts for differentiating a abusive group from a harmless sect.

The wealth of information is readily apparent even on Wikipedia where they have 10 different checklists indexed, including a fascinating historical reference to a 1979 addendum from a United States Congressional Research Service report.

Although at a cursory glance, the Church of Scientology pretty much fails on all or most points no matter which list you investigate, sometimes too much information is a bad thing.

Thus, in the hopes of identifying one singular reliable resource for those who are still actively involved with the Scientology organization, that may be Facing Their Doubts and asking that gut-wrenching question "Is Scientology a Cult?" we humbly recommend the following classic article from the Factnet.org website.


Warning signs of a destructive cult

This excellent work provides an easy-to-digest outline of key warning signs and factors of concern that current members of the Church of Scientology should evaluate for themselves once they begin the process of becoming informed. The following is an abbreviated checklist excerpted from this article for the sake of a quick reference.

1) A destructive cult tends to be totalitarian in its control of its members' behavior.

2) A destructive cult tends to have an ethical double standard.

3) A destructive cult has only two basic purposes: recruiting new members and fund-raising.

4) A destructive cult appears to be innovative and exclusive.

5) A destructive cult is authoritarian in its power structure.

6) A destructive cult's leader is a self-appointed messianic person claiming to have a special mission in life.

7) A destructive cult's leader centers the veneration of members upon himself or herself.

8) A destructive cult's leader tends to be determined, domineering, and charismatic.

Do any of these warning signs resonate with your experiences in the Church of Scientology? If so, checkout the following fair usage video based on one of Scientology's own propaganda PSA that makes several false claims about their stance of human rights, but edited here to reveal the truth about the harm the organization is currently inflicting on their followers with no remorse.


For additional recommended references, see the Checklist of Cult Characteristics that was covered in an earlier post. Also be sure to review Cult Warning Signs by Rick Ross, which features the following useful checklists for similar areas of concern that are likewise applicable to the Church of Scientology.


Click the title of this post or ob any other entries on this micro blog to visit the related link for a given announcement.