Adapted from posts by PandaTermint and Freeminds,
in the Leaving VS Blowing discussion thread
on ESMB 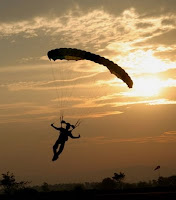 Do you find the Church of Scientology to be a suppressive group? Have you ever tried to handle any of the suppressive aspects or actions you've observed in the Church? Do you sometimes wonder about how the organization currently operates and asked yourself – Is This a Religion?

If you answer yes to any of the above questions, then you are probably beginning to realize that there is no way to speak out within the Church regarding the outpoints so readily apparent nowadays.

Despite these issues, over 1500 former members have spoken out about the abuses that run rampant within the Scientology organization. An effort has also been completed to document the 31 Factors for Scientologists to Consider when they begin to face their doubts regarding their current involvement with the Church.

"Sometimes others seek to crush one down, to make nothing out of one's hopes and dreams, one's future and oneself. ... The real handling of such a situation and such people, the real way to defeat them is to flourish and prosper." - L. Ron Hubbard


If you find yourself unable to flourish and prosper within the Church of Scientology, or can no longer tolerate the off-policy and abusive practices being adhered too, then the following post from Freeminds on ESMB should provide some useful food-for-thought  when deciding if you want to leave.

Imagine yourself on a skydive. You're part of a large group, with a common purpose... which is to 'build' a complex formation, for the delight of a crowd on the ground. You all piled out of a couple of 'planes at 14,000 feet, and tried to take up the right grips with your buddies, just like you practiced on the ground.

Have you got that? You're a skydiver. It's the most exciting thing you've ever done. It's an expensive, elite world with its own language, and special equipment. It sets you apart from ordinary mortals. It felt good to be a 'skygod', right from your first static-line jump and on up through the qualification system. People who haven't done it just can't understand. You call them whuffos, which is skydiver-speak for 'wog'.

Some people exited their 'plane a fraction of a second behind, and the difference in their acceleration has left them struggling to catch up. Some people are in place, but the buddy they were expecting to grip is missing, or has gone low. The core of the formation has been built, but there are still a dozen or more people drifting in to make their slot. Meanwhile, you're burning through a thousand feet in five seconds. Where the fields below were just a random mosaic, you can now make out roads, and buildings. Now the scenery is Getting Big. Soon, you'll be able to see cows.

The formation is not complete. Everyone is still trying to Make It Go Right. The people at the core have done everything they can. They're in place. They keep the faith. They hold their course. One hundred and twenty miles an hour, straight down towards destruction. Now the needle on your altimeter is drifting into the amber section. After that, there's only red.

You don't like this. It's not right. Your instinct tells you that it's not safe! Everybody around you is sticking with it, though. You don't want to be the bad guy. The one who wrecked the formation: the person who bailed just when it was about to be a success. Perhaps you don't have the full picture: perhaps that person way above you is just a video guy, and even now the formation is being completed? Perhaps your altimeter wasn't set right, and you're just being nervous?

You try to shout to your neighbour, but the wind whips the words away. Everybody else is so focused on the goal that they can't see the danger -- or perhaps they're so fearful of being the first to make a fuss that they don't dare to break formation.

Your 'dytter' (digital audible altimeter) starts beeping, horribly loud in your right ear. After the beeps it will 'flatline' to let you know that you really have run out of time. There's an umpteen billion billion tonne ball of rock coming right towards you (relatively speaking) and it can crush you like a bug on a windscreen.

Now, what do you do?

What is the ethical thing to do?

In truth, it's time to save your own life. Surviving group stupidity is not disloyalty. Show the rest of the group some nylon, and hope that they get the idea. Deploy your parachute. Live. There will be other formations to build, later.

Scientology in a skydive. They really aren't all that dissimilar!
Freeminds on ESMB


Additional Resources (for when your ready to pull the rip cord):


Click the title of this post or ob any other entries on this micro blog to visit the related link for a given announcement.
Posted by AnonLover at 9/02/2011 04:03:00 PM
Email ThisBlogThis!Share to TwitterShare to FacebookShare to Pinterest
Labels: Becoming Informed, Leaving the Church, Outreach Messages